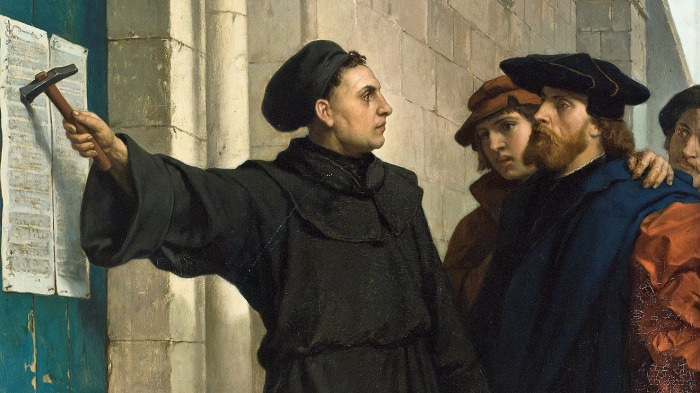 Nearly 500 years ago, a small-town professor accidentally ignited a controversy that would change Christianity forever. Martin Luther’s academic critique of the sale of “indulgences” – the promise of forgiveness of sins in exchange for money – expanded to a wide-ranging disagreement about the authority of the Pope, the importance of ecclesiastical rituals, and the relationship between tradition and Scripture.

Luther’s insight had a profound impact on how his protestant heirs view the law of God. If there is one thing we protestants agree on, it is that we shouldn’t be legalists. But this agreement is a bit clouded by the fact that “legalism” isn’t a single phenomenon, but a general category for any kind of misuse of the law. Just as Luther distinguished between two kinds of righteousness, I think it is helpful for us to identify three distinct kinds of legalism.

1) Extra-biblical requirements. Often the first thing that springs to mind when we think of “legalism” is the practice of adding additional requirements to God’s law. This form of legalism appears in Mark 7:1-23, in which the Pharisees censured Jesus’ disciples for eating food without giving their hands a ceremonial washing.

The problem with the Pharisees’ attitude was that such a practice was nowhere commanded by God. It was “the tradition of the elders” (Mark 7:3, 5). The idea, it seems, was to guard against any possibility of contracting ceremonial defilement (which is a genuine concern of the Old Testament law). But by making their human traditions a requirement for themselves and others, they equated them with the very commandments of God, even to the point of setting aside those commands when they came into conflict with the tradition (Mark 7:8-13).

2) Externalism. Jesus responded to the Pharisees with a quotation from the prophet Isaiah: “This people honors me with their lips, but their heart is far away from me. They worship me in vain, teaching as doctrines the requirements of men” (Isaiah 29:13; Mark 7:6-7). The second part of this quote (“teaching as doctrines the requirements of men”) points us to the kind of legalism we’ve already discussed, the introduction of man-made, extra-biblical requirements to supplement or even supplant the commands of God.

But Jesus builds on the first part of this quotation to point out another problem with the Pharisees’ attitude to the law of God. It wasn’t just that they were adding extra requirements of their own (Mark 7:8-13). They were also leaving out the most important part of the law – the call to love the Lord with all our hearts – focusing instead on external behaviors and physical rituals (Mark 7:14-23). They were going “below the line” by reducing the law of God to something measurable, manageable, achievable.

The Pharisees were guilty both of adding man-made requirements to the law and of reducing the law’s scope to external behaviors and rituals. But we can sometimes be guilty of only one or the other of these forms of legalism. For example, some Christians seem to think that it is a sin ever to feel angry, lonely, or sad. This is not externalism – it rightly prioritizes the attitudes of the heart – but it imposes an unbiblical standard that Jesus himself did not meet (Mark 3:5; 14:35).

By the same token, we can be guilty of a legalistic focus on external behaviors even when we aren’t going beyond God’s commands. We may be doing what God says is right and avoiding what he says is wrong, but not out of desire to please and honor him. When I read my Bible without really seeking to hear from God, or bottle up my anger out of a fear of the consequences, or serve in ministry to demonstrate what a good person I am, I am not actually keeping God’s commands – I am only pretending to on the outside.

3) Works-Righteousness. This third kind of legalism is the deadliest of all – the attempt to be justified through keeping the law. It is the inherently futile quest to deserve the approval of God through one’s own behavior rather than through the perfect person and finished work of Jesus.

While extra-biblical requirements add to God’s law and externalism reduces it to a matter of outward behavior, works-righteousness fundamentally misrepresents the purpose of the law. It acts as if God gave us his law so that we could earn his approval.

Works-righteousness does not actually add anything to God’s word, because the law really does contain the promise that keeping it will amount to righteousness (Deuteronomy 6:25). But it also contains the prediction that those who received the law would not actually keep it (Deuteronomy 31:15-29). In fact, we all fall far short of the righteous standard of our holy God; it is only through the death and resurrection of Christ that we can be justified in his sight (Romans 3:9-24). Works-righteousness thus  goes “below the line” of God’s word by leaving out both the bad news (none of us meets the standard presented in the law) and the good news (Christ has met the standard for anyone who believes).

Though they can exist independently, these three kinds of legalism are often found together. After all, it’s a lot easier to think that you can be justified by your own works if you have reduced the law to a matter of external compliance, or if you have substituted your own achievable standard for the perfect law of God. On the other hand, if you recognize what the law actually requires, works-righteousness will either be accompanied by an extreme lack of self-awareness or a crushing consciousness of your failure to fulfill God’s commands.

As an earnest young monk, Luther keenly felt that burden of guilt. He knew how far he was from loving God with all his heart and soul, and none of the man-made penances he endured could make up for that fact. He was liberated from this legalism only by the biblical gospel that God justifies sinners who come to him by faith in Christ that. It was this message that went on revolutionize the lives of millions of others around the world and across five hundred years.

It was Luther’s commitment to God’s word that enabled him to hear this good news. This remains the only reliable remedy for all three forms of legalism. Whether we’re tempted to add to God’s commandments, reduce them to achievable externals, use them as a means to justify ourselves, or some combination of the three, we will keep from being legalists as we continually recommit ourselves to staying on the line of God’s word.